Alan 'Howling Laud' Hope, now retired, has worked in the entertainment business and as a hotel proprietor. He has, for many years (and always on the OMRLP ticket), served on town councils in various capacities, including a stint as Town Mayor in Ashburton, Devon between 1998-2000. In 2017, the 25th time he has stood for UK Parliament, he ran against Prime Minister Theresa May alongside Lord Buckethead in the Maidenhead Constituency. 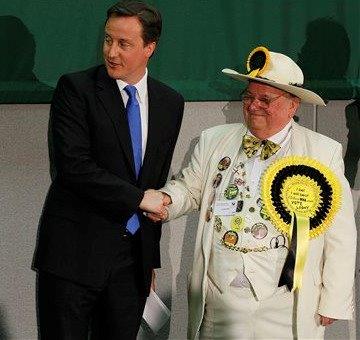 Please note that, although the character Lord Buckethead has condescended to join the ranks of the Official Monster Raving Loony Party, the person who played the part of Lord Buckethead during the 2017 General Selection has decided to create a rival character—Count Binface—for the current vote. The story behind this can be read in the Guardian column mentioned below and at Count Binface's website. This being so, we leave it to listeners to decide which is the real Lord Buckethead. Is it the latest "incarnation" standiing in the Uxbridge and South Ruislip Constituency? Or the rival Count Binface, also standing in that constituency against Boris Johnson?

Since the interview, TMR has been supplied with a short history of the Lord Buckethead saga. With the permission of the Official Monster Raving Loony Party, TMR here presents the words of the official historian of the party.

There have been three different people who have appeared as Lord Buckethead in four General Elections against the current Prime Minister. The details follow. 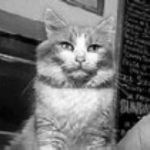 "At the conference of 1999, when the “election” came up for the new leader, it was a two-sided race between Howling ‘Laud’ Hope and Catmando. The voting was very close; they each got 112 votes. It was decided that they should both become Joint Leaders of the first political party to be ruled by man and beast, until somebody at the back of the room shouted: “No you're not, what about Margaret Thatcher and John Major?” Alas, Catmando met a lorry one day, and the lorry won!"

Items mentioned in / relevant to the interview