In place of our scheduled interview (which unfortunately had to be abandoned), we take the opportunity to present an exclusive interview with the broadcaster, science historian and futurist James Burke.

During the 1960s, '70s, '80s and '90s, James Burke was one of the most famous and most engaging presenters of science and technology programmes on British television. In 1969 he was one of the main presenters of the BBC's coverage of the Apollo 11 moon landings. A household name in the UK, but also well-known around the globe, James Burke became widely admired for his enthusiasm, humour and ability to explain scientific and technological advancements in their historical contexts.

In this engaging interview, conducted by Mark Campbell in 2014, James Burke talks about his life in television, his experience of creating the TV series Connections, and shares something of his personal vision as to how technology might impact human society in years to come.

[The Mind Renewed would like to thank both Mark Campbell and James Burke for kindly agreeing to their interview being included in this programme.]

What if the moon is really a hologram? How many memes can dance on the head of a pin? Why hasn't Frank Johnson been abducted by the Nephilim Fairies? How many thylacines does it take to change a light bulb?

To kick off 2017 here at TMR we welcome back high-ranking members of The Fireside Nephilim Boys, a semi-secret society and multinational think-tank affiliated to Like Flint Radio, for another friendly and entertaining New Year rounddiv chat. Joining together from diverse regions of the globe we look back over the last year and discuss pretty much anything that managed to get our collective goats during 2016.

Join us—GK (Australia), Frank Johnson (US), Cliff Garner (US), Jeff Goldblum's Laugh (US) and Yours Truly (UK)—as we discuss these and many other subjects and put the world to rights in just under ninety minutes.

TMR 158 : Being There (with James Corbett & Julian Charles) 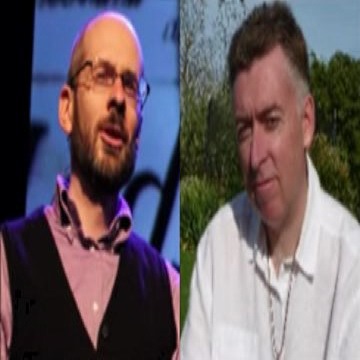 As a way of "checking in" with listeners before TMR returns properly next week—following my "paternity leave" away from the show—I take the opportunity to share a recent conversation I had with James Corbett. James kindly invited me onto The Corbett Report to discuss the great film Being There as part of his ongoing podcast series, Film, Literature and the New World Order.

"Julian Charles of TheMindRenewed.com joins us to discuss Being There, the 1979 film by director Hal Ashby that follows the story of Chance the Gardener, a simple man with no experience of the outside world who is suddenly thrust onto the national political stage. Despite his complete lack of knowledge and experience (or precisely because of it) the powers behind the scenes float him as a potential candidate for next president of the United States. So is this a reflection of political reality, or broad satire? What does the movie tell us about the way modern media shapes the political landscape? Find out in this edition of Film, Literature and the New World Order."—James Corbett

Read more: TMR 158 : Being There (with James Corbett & Julian Charles)

"Who made God?"—"Are the Bible's miracles all made up?"—"Does God see us when we visit the bathroom?"

This week we welcome David Andrew Robertson, minister of St. Peter's Free Church, Dundee and Director of the Solas Centre for Public Christianity, who joins us for a thought-provoking and entertaining Q&A on Christianity, theism and the Bible. Without any prior warning as to what's coming up, David responds to questions—from the challenging to the just-plain-quirky—based on emails and comments that have come into TMR over the last couple of years.

"David is the minister of St Peter’s Free Church in Dundee, Scotland (a church that is best known for being the church of Robert Murray McCheyne). He is the author of Awakening (a contemporary account of McCheyne’s life), The Dawkins Letters, Magnificent Obsesssion and Engaging with Atheists. He writes regularly for The Scotsman and Christianity Today. David enjoys reading prolifically, playing chess and sampling fine whisky. David is married to Annabel and they have three children: Andrew, Becky and Emma Jane."

A series of three interviews with Thomas R. Goehle

For this short series of three interviews, we were joined by writer and researcher Thomas R. Goehle, author of the book America's Post-Christian Apocalypse: How Secular Modernism Marginalized Christianity and The Peril of Leaving God Behind at the End of the Age.

Thomas Goehle earned a Master of Arts degree in Philosophy of Religion (honors) from Denver Seminary. He lives in Williamsville, New York where he is working on his next book tentatively entitled "Transhumanism, AI, and the Apocalypse".

During TMR's Easter break, we take the opportunity to share a classic interview - "Who Rules America?" - with Dr. G. William Domhoff, Research Professor of Sociology at the University of California, Santa Cruz. Conducted as part of the Alternative Views TV series co-founded by Frank Morrow and Douglas Kellner, which addessed issues often ignored or misrepresented by the mainstream media, this impressive interview explores the structures of power in the US and analyses the dominant role of the Power Elite.

Although recorded back in 1986 and focused specifically on the US context, this important interview nevertheless contains many valuable insights into the dynamics of elitist power that can help to inform our understanding of the contemporary context as we unwillingly journey into a New World Order.

(The interview with Dr. G. William Domhoff included in this episode is Copyright © Frank Morrow 1987. It appears here in accordance with the Creative Commons licence (CC BY-NC-SA 3.0 US) as indicated by Brian Koenigsdorf, the series technical adviser, who has made the interview available at Archive.org (https://archive.org/details/alternative_views). TMR would like to thank Dr. Douglas Kellner, co-founder of Alternative Views, for confirming the genuine status of the CC licence.)

If you're wondering what's happening to The Mind Renewed, all is revealed in this thoroughly dehumidified episode, as we explore the effects of the Boxing Day Flood upon the state-of-the-art studios at TMR, and uncover the host's various attachments to David Bowie, Pierre Boulez and solid oak flooring. Thereafter, in place of thwarted antediluvian good intentions, we take the opportunity to present a fascinating lecture by academic philosopher Dr. Del Ratzsch on the subject of Supernatural Design and the question of its place within Science.

Variety, as they say, is the spice of life...

(The lecture by Dr. Del Ratzsch included in this episode is Copyright © MaclaurinCSF (http://maclaurincsf.org/), all rights reserved, and used here with kind permission.)

To kick off the New Year here at TMR we welcome The Fireside Nephilim Boys—a multinational think-tank affiliated to Like Flint Radio—who join us from diverse regions of the globe for a friendly, entertaining and sometimes controversial rounddiv chat about... well, pretty much anything that managed to get under our collective skin during 2015.

Is NASA hiding the truth about all our washing machines? Do missing socks hold the key to Nephilim reproduction? Was Jade Helm secretly organised by Turkish President Erdoğan as a means of distracting the US people from the dangers of termite-generated global warming? Join us—GK (Australia), Frank Johnson (US), Crusy (South Africa), Cliff Garner (US) and Yours Truly (UK)—as we discuss these (well, perhaps not precisely these) and many other subjects and put the world to rights in just under two hours.